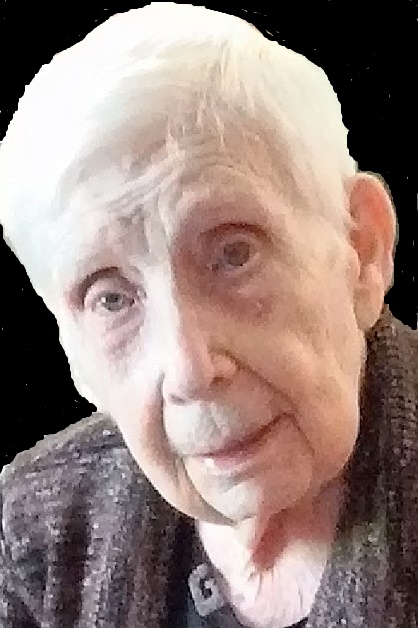 Stewartsville…….Maxine Elizabeth, the only child of Philip Lane, Jr. and Nellie Nauman Lane was born November 3, 1916 in Craig, Missouri and passed away on Saturday, December 10, 2016 at the Maryville Living Community in Maryville, Missouri at the age of  100 Years  1 Month  7 Days.  As a baby, her family moved to the Lane farm seven miles from Albany, Missouri where they lived with her grandparents after her grandfather  Philip Lane, Sr. who was a decorated Civil War veteran became disabled after a stroke. After the deaths of both her grandparents and the farm being sold, her family moved to St. Joseph, Missouri where she was a first grader at Blair Elementary School. At about age ten they returned to the Albany area, moving around several times and farming.

Maxine developed a love for the outdoor freedoms which she enjoyed as she spent her time with her Dad helping with the planting and harvesting.  She would talk of driving teams of horses and mules and the adventures she had with her dogs and her horse Birdie that she loved so much and rode as much as three miles to school.  Throughout her life she always had pets, especially dogs.

The family left farming and moved to Mound City, Missouri where her mother’s sister Elizabeth and Charles Mavity lived. When Maxine’s mother became ill with cancer the family moved to her maternal grandparents’ home in Craig where her mother would be cared for until her death. Maxine was sixteen years old and it was a very difficult time for the family. Maxine soon was to find the motherly nurturing care she needed in the Mavity home in Mound City where she continued high school.  It was there that her first cousins, Gene and Charles (Junior) became as brothers to her. Aunt Lizzie taught her much about keeping house and cooking. These were skills which her own children and grandchildren would appreciate all their lives.

On the evening of April 10, 1937 in Rockport, Missouri she was secretly married to Loren Norman Offenbacker of Mound City, Missouri. They each continued to live in their individual homes until they were able to set up housekeeping in Oakland, Nebraska, where Loren farmed for a time, before moving back to Mound City where Loren farmed for Roy Wehrli before moving to the farm home that Loren’s grandfather, Judge M.L. Norman built. Their three children grew up there, James Donald, Jerry Martin, and Dianna Gayle. On March 8, 1951 Maxine and all three children were baptized at the First Christian Church and Loren moved his membership there. Even when they were out of town she made sure her children attended a service wherever they might be and earned their Sunday School award pins.

When Dianna was a senior in high school, they moved from the farm to Mound City and Maxine worked as a cook at the High School. In 1965 they moved to Ottawa, Kansas where the Mavity family as well as another aunt and uncle and their families then lived.  They operated and managed the Franklin County Humane Shelter for a time before both were employed by the Ottawa High School. Loren’s sudden death on December 26, 1966 left her a widow at age 50.  She then made her home in Tarkio with son Jerry and his wife Bobbie and there she worked as a cook at Tarkio College. Later she moved to St. Joseph, Missouri to stay with her daughter before finding her own place and being employed at Woolworth Drug in the East Hills Mall. She also worked as a private housekeeper for a prominent family in St. Joseph.

On February 5, 1972 she married Ernest F. Helton of St. Joseph and they bought a farm in Clinton County near Stewartsville, Missouri. Ernie purchased a house in St. Joseph which he had moved to the farm and they made it their home for the nearly 16 years they had together raising cattle and a large garden and she was able to enjoy being outside. After Ernie’s sudden death on December 27, 1987, she moved to Stewartsville where she had developed close friendships and enjoyed her church family at the Presbyterian Christian Church. Several years she was able to spend the winter months with her daughter Dianna and Ed Shellenberger where they had made their home in Texas and to make several adventurous trips to Branson on the OATS bus with her good friends. Although she had never driven a car she enjoyed going to visit her grandchildren in Iowa by riding the Greyhound bus. She also enjoyed spending time in the home of her first cousin Anna Belle Sharp who is very close in age and has always been more like a sister to her.  Of course, she always had the companionship of a canine friend. She was able to be at home in Stewartsville until October, 2010 when she had a serious falling accident.  After living for fourteen months in her son Jim’s home, in December, 2011, at age 95, she moved to Golden Living Community, Maryville, Missouri (now Maryville Living Community).

Funeral Services will be 10:00 a.m. Friday, December 16, 2016 at Turner Family Funeral Home of Stewartsville, Missouri with visitation one hour prior to funeral services. Friends may come by funeral home from 9:00 a.m to 7:00 p.m. Thursday to sign register book and family will receive friends one hour prior to funeral service on Friday.   Interment:  Mount Hope Cemetery in Mound City, Missouri. Memorial Contributions: Presbyterian Christian Church of Stewartsville.  Online Condolences: www.turnerfamilyfuneral.com