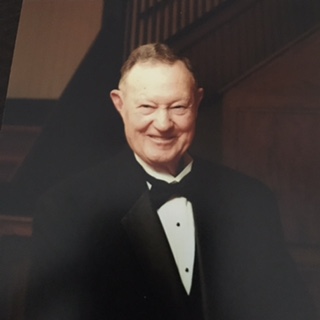 Albert Marion Smith, age 87, passed away Monday, January 2, 2017, at the Veterans’ Home in Cameron, Missouri. He was born to John Nicholas and Bessie Ann (Pulley) Smith on April 23, 1929, at the family farm home near Oak, Missouri.

Albert graduated from Maysville High School in 1947. From 1951 until 1953, Albert served his country in the U.S. Army. He was a radio operator in Japan and earned the rank of Corporal. Albert married Zelma Louise Cobb at Maysville First Christian Church on April 16, 1954. They were blessed with three children, and they lived and farmed near Maysville. Albert liked raising cattle and horses. He was an active member of Maysville First Christian Church, serving as an Elder, Sunday school superintendent, and a Board Member. He was also a Board Member for the Maysville R-I School District and Camden Township. Albert enjoyed coaching his sons’ baseball and softball teams. In January, 2014, Albert moved to the Cameron Veterans’ Home.

Albert was preceded in death by Zelma in September, 2016; his parents; brothers Byron, Frank, Lee, and Ernest Smith; and sisters Marguerite Bashor and Emalene Cartee. He is survived by his children and their spouses, Steve and Sharon Smith, Columbia, Missouri; Jeanette and Raymond Neibling, Highland, Kansas; and Scott and Ashlee Smith, Columbia, Missouri; seven grandchildren, three great-grandchildren, and many cousins, nieces, nephews, and friends.

The family will receive friends at Turner Family Funeral Home in Maysville on Friday evening, January 6, 2017, from 6:00 to 8:00 p.m. A Celebration of Life service will be 10:00 a.m. Saturday, January 7, 2017, at Turner Family Funeral Home of Maysville with burial in Oak Lawn Cemetery of Maysville with full military honors. Memorials Contributions: First Christian Church of Maysville. His family is grateful for the wonderful care given to Albert by the Cameron Veterans’ Home staff. Online condolences: www.turnerfamilyfuneral.com