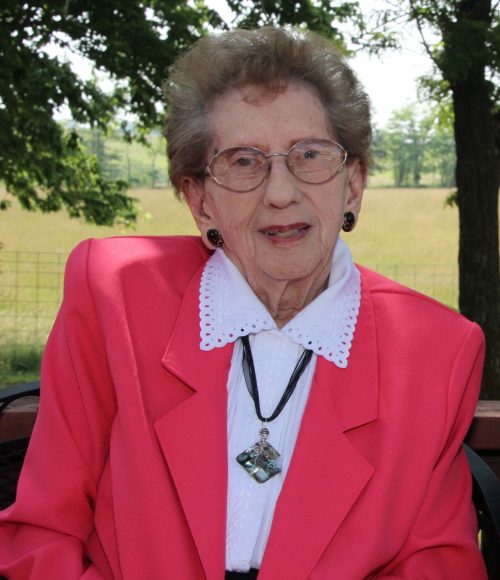 Maysville, MO…..Ruth Dale (Wulfkuhle) Owen passed away on January 12, 2021, at the Cameron Hospital at the age of 96. Ruth was born on August 2, 1924 in Wellington, MO. She was the first of two daughters born to Christopher John and Beulah (Larkin) Wulfkuhle. Ruth attended school in Wellington and in 1944 graduated from Warrensburg State Teacher’s College with a teaching degree in Education. She continued her education throughout the years and received her Master of Science Degree from Central Missouri State University in Warrensburg.

In her move to Maysville to teach, she found a room at the residence of Guy and Opal Crabill and their six children beginning a lifelong friendship with the family and especially with daughter Jean Crabill Waltemath.

Her teaching career began in 1944 at Maysville High School as the Business Department teacher. This career spanned 42 years all being at the Maysville School District, retiring in 1986. Ruth had one huge job, teaching. As a teacher she touched the lives of many family members, cousins (first and second generation), nieces, nephews, great nieces and great nephews, friends, children of friends, and grandchildren of friends. If you took typing, shorthand, or bookkeeping you knew Mrs. Owen. She knew all students in school by name and their parents. She was also the Senior Class sponsor for many years. Many students considered Mrs. Owen a mentor in their careers either as teachers or in the business field.

In 1946, she met Loren B. “Doc” Owen when she sold him a ticket to a basketball game at Maysville High School. They were married on August 29, 1948 at the Wellington Methodist Church. In August, 2020, Ruth and Doc celebrated 72 years of a lifetime together.

After their retirement Doc and Ruth spent winters in Mission Texas for 32 years exploring the area, making new friends, and enjoying the warm winters of South Texas. Even after suffering a stroke she was still able to ride a three wheeled bicycle around the park they lived in, use a walker and pull herself into the vehicle.

Ruth’s passion for genealogy took her and Doc across the United States verifying information for the family history. As a member of the Historical Society Ruth enjoyed talking with people and helping them locate information about their families.

Over the years they have visited almost every state in the union traveling to Navy reunions, gathering family tree information at Ellis Island in New York or Salt Lake City, Utah. Always up for an adventure they left in June 1986 for Alaska in a pickup pulling a trailer. Ruth’s nephew was stationed in Alaska at the time and they always wanted to see that state, so away they went. They couldn’t resist visiting Washington State to see Mt. St. Helens after the eruption.

She was a faithful member of the Maysville United Methodist Church attending when they were home and weather and health permitted; Chapter DV of the P.E.O. Sisterhood; charter member of Beta Rho Chapter of Alpha Delta Kappa of which she recently receiving the Golden Sister award in recognition of 50 years of membership; Lafayette-Lexington DAR; Charter Member of the DeKalb County Historical Society, serving as president for 14 years; Northwest Missouri Genealogical Society; Missouri State Genealogical Society, where she received it’s Director’s Award. In 2008 she was named one of 20 Who Count by the St. Joseph News-Press. Ruth was always an active participant of any organization to which she belonged.

Ruth was preceded in death by her parents, her sister Lois Jean Hough, and niece Ethel Gunderson.

She will be sadly missed by not only her family but by the many students she taught and the numerous friends she made over the years.