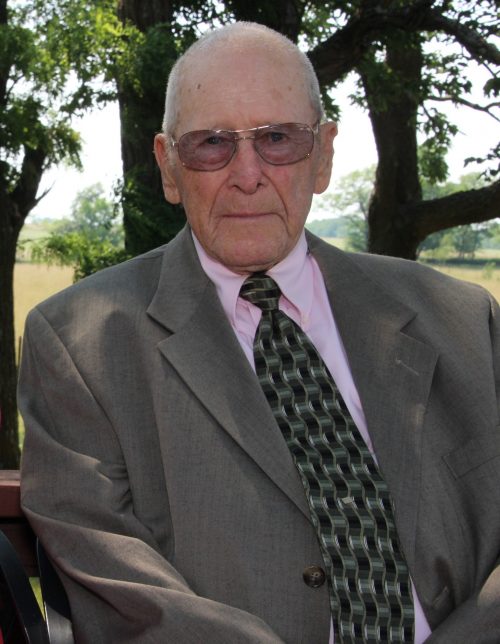 Loren B “Doc” Owen passed away on February 3, 2021, at the Cameron Hospital at the age of 97. Doc was born on May 11,1923, on a farm northwest of Fairport, MO. Loren was known to everyone as Doc with the exception of his mother who always called him Loren. He was the sixth of seven children born to Benjamin Alexander and Grace Olive (Latkey) Owen. Doc began school at Red Star School northwest of Fairport. Along with his brother Bob and sisters Opal and Dorothy rode their horse Toby to school. The family moved to Maysville when Doc was seven years old when his Dad was elected Clerk of the Circuit Court of DeKalb County.

Per Doc, his first job was a good one, throwing the paper. The morning Gazette and the evening News Press paid him $2.50 a week. This was a 7 day a week job. This job was very important to him because if he didn’t have a job, he would not have any money. He later drove a feed truck for Owen Produce owned by his Uncle Ted Owen.

On February 13, 1943 Doc joined the military at Ft Leavenworth to see the world. He was assigned to the United States Navy and took basic training at Farragut Naval Training Station in Idaho. During World War II he served aboard the USS Bogue patrolling the Atlantic between Europe and the United States. The Bogue was part of a “hunter-killer” fleet carrying 12 F4F wildcat fighters and 9 TBF Avengers torpedo bombers. Doc took great pride in the fact that the Bogue sank the only Japanese submarine in the Atlantic while attempting to deliver $28 million in gold to Nazi Germany. He was awarded a Victory Medal and Presidential Unit Citation 1 Star. Doc said he joined the service to see the world, however he saw more of the ship’s kitchen than the world as his job was Meat Cutter/Cook. Doc was honorably discharge on February 21, 1945. He then started his 18-day trip back to Maysville. Upon his return he went to work hauling coal for his Uncle Wade Owen.

In 1946 he met his lifetime partner Ruth Wulfkuhle, the Business Department teacher at Maysville High School, when she sold him a ticket to the high school basketball game. On August 29, 1948 they were married at the Wellington Methodist Church, Wellington, MO. They moved to their home on the corner of Water Street and 6 Highway.

He attended Coyne Electric School in Chicago, IL., where he received his certification in refrigeration and radio electronics on February 19, 1948.

In 1954 Doc and Ruth bought 30 acres north of Maysville where they would build their lifetime home. In 1956 they poured the basement and in November of 1961 they finished their home and had a Thanksgiving dinner for an ever-growing Owen family.

After selling the station Doc worked as a mechanic for Sam Owen Ford Garage and JB Harwood. He also conducted his own electrical business.

In 1964 he was hired by the Missouri Department of Transportation as a Field Mechanic. Hired through the MODOT Office in St Joseph, he worked in Maysville, King City, Stewartsville and traveling where ever he was needed. On January 1, 1986 he retired from MODOT with 22 years of service. In May Ruth retired from teaching after 42 years and they began their retirement by traveling to Alaska to see her nephew that was stationed there.

They both loved to travel and spent many hours on the road going coast to coast. To see Mt. St Helens, to Ellis Island to Salt Lake City and many more destinations. He so enjoyed his Navy reunions. Eager to renew old friendships and explore the reunion locations as they were in a different location each time. For 32 years they spent their winters in Mission, Texas, exploring the area, making new friends and enjoying the warm winters. Exploring was Doc’s sense of adventure always anxious to see the progress of any construction, whether it was a road, the border wall, a new building, he loved it all. He could always remember the progress made so he could tell all the relatives back in Missouri.

In their retirement years they were actively involved with the DeKalb County Historical Society. Doc served as the chairman of the Building and Heritage Park Committees. He single-handedly excavated the ground under the historical society basement, a wheelbarrow load at a time and hauled it away.

He was an avid golfer making 3 holes-in-one at the Maysville Lakesite Golf Course. Doc was a member of the Wednesday Night Men’s Golf League. He played golf every day in Maysville and while in Texas played every Thursday.

Doc and Ruth celebrated 72 years of marriage in 2020. They were always together. They were each other’s support staff. He was her caretaker when she had a stroke. It was a love story that lasted to the last day and now has a new beginning.