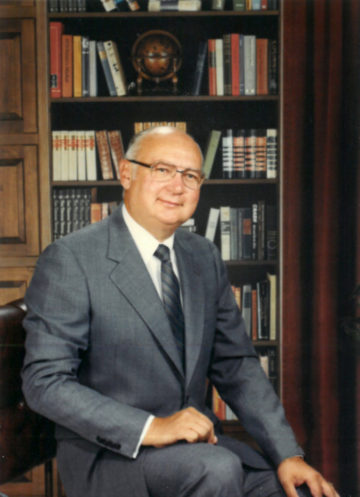 Kenneth Jay Swails, 91, St. Charles, MO, (Kearney, MO 1976-2014), passed peacefully to his Lord God Almighty on Sat, November 2, 2019 at his home in St. Charles, MO, after a long illness with pneumonia, Parkinson’s and heart failure.  His daughters, Susan and Sharon were at his side.

Kenneth was born on November 28, 1927 in St. Joseph, MO, to Edwin Jay and Ethel Velma Swails.  He married Joyce Darlene (Beitz) December 27, 1949.  He found strength and encouragement through her support and prayers for his church work, career, and home life.  He missed her greatly after her passing on July 13, 2019.

He proudly joined the USNR Wartime Duty, World War II in 1946. He served in three Naval Hospitals at Medical Corpsmen School, at a Tuberculosis hospital, and with paraplegics from the European war. In 1947 he became a Pharmacist Mate Third Class and had an honorable discharge with the World War II Victory Medal. In 1951, Ken was recalled back to active duty, with the Marines in the Field Medical Training Battalion MB. He chose not to take Veteran’s Benefits, so “the men and women who really need them will have them.”

He donated time and services to the Community of Christ church as an ordained minister.  A member of the Presiding Bishopric Investment Committee since its inception in February 1986, Ken ended his long—running term in June 2005. For more than 10 of his 19 years of service on the World Church Investment Committee, Ken was its chairperson.  He continued to serve as a member of the World Church Finance Board.  Kenneth also served the church in various offices at the regional-level and local church congregations.  He was appointed by the President of the Community of Christ church to serve on the Outreach International Board of Directors.  He served for 12 years as a Board member, officer, and a committee member chairman.

He enjoyed hunting and fishing with his father and brother Norman.  His wife and two daughters vacationed throughout the various states, both oceans, Canada, and Mexico.  He and Joyce had wonderful trips on five cruises and was responsible for leading several trips throughout the U.S. with Farmland Securities Co. sales agents and their wives.

Kenneth is preceded in death by: his parents Edwin and Ethel (Constance) Swails, his wife Joyce D. Swails, his son, Steven Edwin Swails; and his granddaughter, Rebecca Lynn Toebben.

Survivors include: his daughters, Susan J. Mack (Doug) of Flora, IL, and Sharon K. (Toebben) Abbott (Brian) of St. Charles, MO; grandchildren: Timothy G. Eisler of Liberty, MO, USAF Maj. Steven M. Toebben of Upper Riffington, UK, and Daniel S. Eisler of Overland Park, KS; his brother Norman and Darleen Swails of Lee’s Summit, MO.  He was an honored uncle by several nieces and nephews on both sides of the family.  Kenneth was a loving family member to step-grandchildren and “Grandpa-Great” to the young ones.