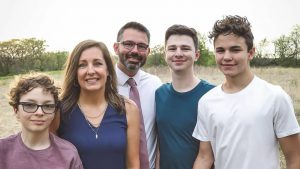 Owners and Operators of Turner Family Funeral Home. Heath is a licensed funeral director & embalmer. He and his family moved to DeKalb County after purchasing Bram Funeral Home in Maysville and Bram-Summerfield Funeral Home in Stewartsville in 2007. Heath has an Associate of Arts degree in Mortuary Science and was a funeral director and embalmer for ten years in his home town of Ava, Missouri before purchasing Bram Funeral Homes in 2007. Heath was elected Coroner of DeKalb County and has held this office since January 1, 2009. Hillary was a Kindergarten teacher for six years before resigning and working at the funeral home full time. Heath and Hillary were united in marriage on July 9, 2021 and have four boys: Tristan, Kellen, Andrew, and Connor. They attend Pleasant Hill Church, enjoy the outdoors and spending time with their family. Heath and Hillary consider it a privilege to serve the people of DeKalb county.

* Missouri State Licensed Funeral Director & Pre-Need Agent @ Turner Family Funeral Home
* 30+ year resident of Dekalb County
* 40 years in full time Pastoral, Evangelistic & Missionary Work
In 1983, Jonathan married the love of his life, Marcia Ellis of Albany, Mo.
They have one son: Jonathan (Anna) Garlock & 2 Grandchildren, England & Jonny.
Garlock, a third generation Minister, currently serves as Pastor of Clarksdale Christian Church, Clarksdale, Mo., and Pleasant Hill Church & Bible Camp, King City, Mo.
Jonathan has a great passion for serving the families of N.W. Missouri with kindness, empathy and Christian love.
His desire is to help provide for funeral and burial needs, and to serve with dignity and respect, to console your family in time of bereavement, regardless of your church affiliation.
Jonathan enjoys spending time with his family, the great outdoors, swimming, traveling, gardening, genealogy, and the ocean.

Carol is the Funeral Director Assistant and has been employed by the Funeral Home since 2005 under the ownership of the Bram family and transitioned with the team of Turner Family Funeral Home. Carol grew up in DeKalb county and moved to Maysville in 1968 when her husband John accepted a teaching position at Maysville High School. In 1973 Carol purchased a clothing store in Maysville, Missouri that she operated until 1981. She later worked for JC Penney Company in Kansas City for 19 years and at that time she and her husband returned to Maysville. Carol is a member of First Baptist Church in Cameron where she is a member of the choir and enjoys working with Awana Boys & Girls, and other ministries.